With the third week of qualifiers coming to an end, the list of players for the first FIFA20 playoffs event has been rounded up. Clash Royale started its Group Stage while CS:GO and Brawl Stars are continuing the qualifications road.

O9 Gang and FA Deadly once again entered the Top 8 stage of the qualifiers. Code Lyoko and Good Game Red outplayed On-Fire and MysteryWarrioRS, while Electronic Rats managed to get past Taktika baklava. A convincing victory for O9 Gang in their match versus FA Deadly sent the former right into the semifinals. Code Lyoko were destroyed by Good Game Red and Electronic Rats slipped past YouLose to secure a match against ToDe05 and GG Red.

O9 Gang and Electronic Rats earned 60 points each by finishing 3rd-4th. Good Game are absolutely dominating the Brawl Stars qualifiers so far. Once again, we could see the two squads battle it out in the final match of the third qualifier. The Gold team managed to beat Good Game Red and secure yet another 100 points on the leaderboard. We are still at the beginning of the qualifiers and the Good Game squads are already cementing themselves in the first places.

This is the current Brawl Stars leaderboard: 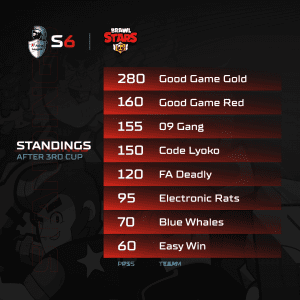 Clash Royale’s Group Stage started in an interesting fashion. Recast Gaming and Crusher Esports played a wonderful match and at the very end, Neki Lik and Recast Gaming were able to win the game. The organization that won the previous season of A1 Adria League is starting with a loss, but it is still very early into the League, especially with the double round-robin format that is featured in Season 6.

Tribe Academy faced the challenger squad, Team KFC, in the first match. The qualified side didn’t put up much of a fight and Tribe’s players closed out the game after 2v2 and KotH. In the last match of the day, the Flayn Esports’ player Enis singlehandedly beat Totem Esports in the KotH mode and secured the first victory for his team. 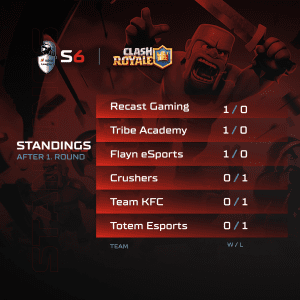 The first trio of FIFA qualifiers has finished. The best eight players from the previous qualifiers will face off in the playoffs, with the best FIFA20 player securing a spot in the A1 Adria League S6 playoffs. In the third FIFA qualifier, brstimir was able to claim the third-place spot after a great game versus arminho0307.

After two wins for brstimir, it was time for another player to secure the first place. rob1 rose up to the challenge and dominated the competition. amke2001 lost the quarterfinals match to brstimir, but the Serbian player was outplayed by his countryman, rob1. After victories against Hardi and discoL, simke bested arminho0307 in the semifinals. simke didn’t stand a chance in the finals and rob1 was crowned the champion of the third qualifier.

The top 8 players that will be heading into the playoffs are as follows: 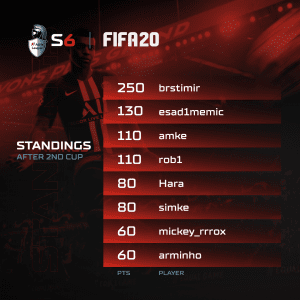 The last two qualification cups were played during the weekend. We got eight more teams that will compete for the final three spots in the next closed qualifier. Marko “Maki” Mijatović and GamerS1337 secured one of the spots after a great showing in the third qualifier. Perspektiva and Onlinerss finished the qualifier in the top 4, and the Macedonian side Good Game rounded up the team list.

Two Kosovar teams will be playing the second closed qualifier. MiKS and eSportsKosova bested BMW and qeveriaKURTI in the BO3 quarterfinals. GENGE beat Pavle “stYleEeZ” Stojanovski and nemakajnas while SUNDUS slipped past peek me in the last game of the day. The team list for the upcoming A1 Adria League season will be completed after the second closed qualifier comes to an end.