Here at A1 Adria League we are all about providing a proving ground and professional esports environment for teams, players, and everyone else in the Adriatic region. We’ve been successful in achieving our main goal for three years in a row now.

The fifth season was an awesome introduction to the two new titles in the League, Brawl Stars and FIFA20. During the player break, we hosted a number of A1 Game Night events and we were eager to see the beginning of the sixth season. The second season of 2020 didn’t disappoint. An even bigger prize pool was available to the players, who as always, did their best to take the regional throne – and the best of the best managed to do so! In the fierce competition of Brawl Stars, two teams stood out. Good Game Red and Gold fought against each other during the entirety of the sixth season and in the end, the Gold players managed to win the first place reward of €1,000.

Despite a perfect Group Stage, Team LAZR couldn’t hold their ground in the playoffs, and the Clash Royale champions’ title went to Nikola and Joža Esports. When it comes to FIFA, amke2001 was crowned the best player of this season. The nine qualifiers culminated with a four-player playoff consisting of Ajdin, brstimir, esad1memic, and amke2001. In the Grand Finals, amke beat the season five winner and secured the main prize for himself. The former lvlUP players won their third consecutive A1 Adria League season during the Reboot Online Games Week. Once again, their opponents in the finals were the Kosovar players from Blink and once again, the Serbian powerhouse prevailed. The third place was taken by 4glory, while another Kosovar team, EAGLES, finished fourth. 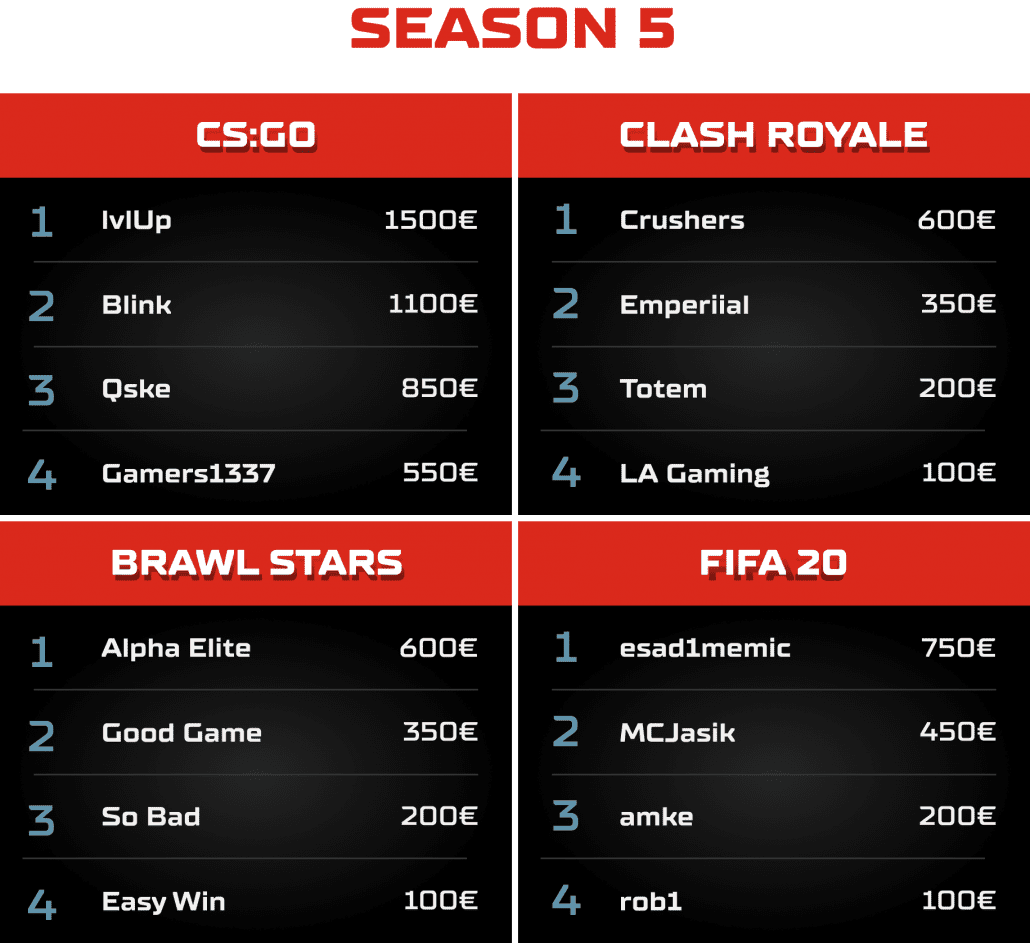 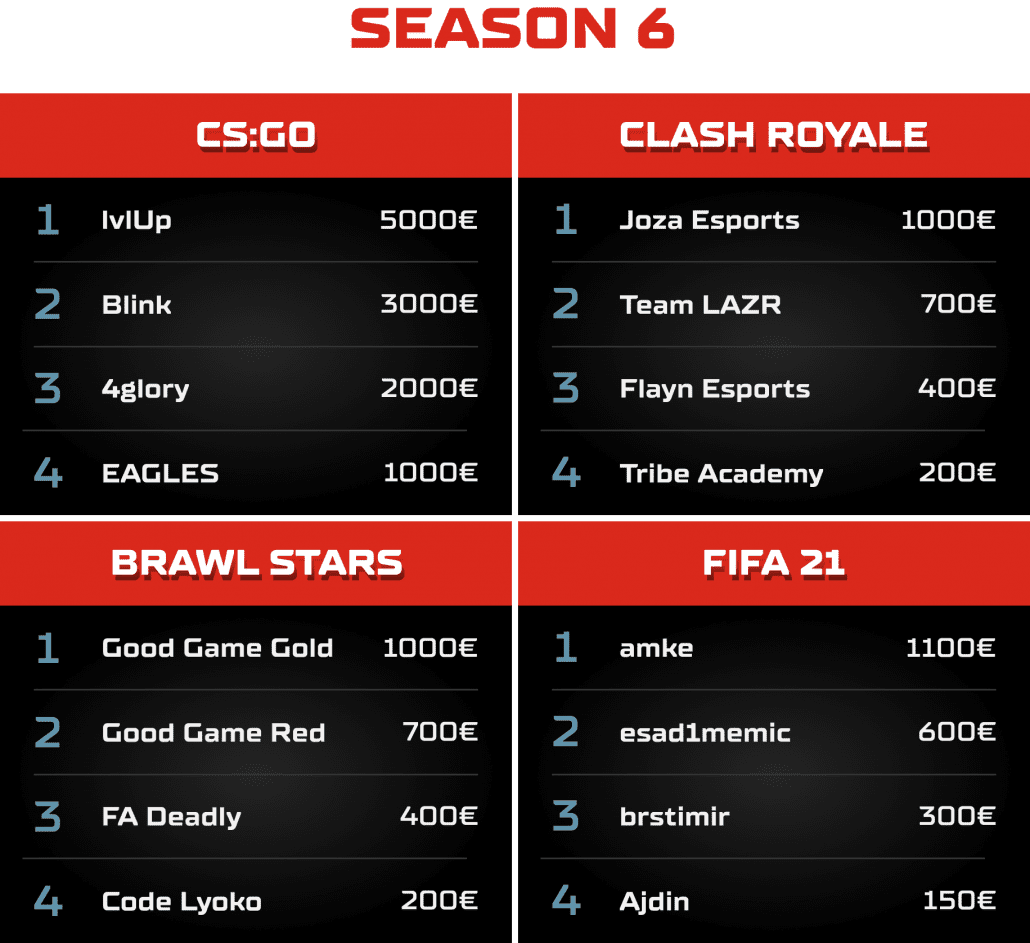 We entered the new year and the new season with two changes in our games’ roster. The DOTA 2 and Hearthstone communities made our last two seasons amazing and we are grateful for that. We decided to add two new titles instead of the aforementioned games and this season was definitely a blast. Brawl Stars made its first A1 Adria League appearance as a rising mobile esports game. The seven qualifiers that were played out saw hundreds of players playing together in teams and making their way up the leaderboard. At the end, Alpha Elite breezed past the competition and were crowned the absolute champions of A1 Adria League Brawl Stars.

CS:GO’s fifth season saw our previous winners, lvlUP, take the W once again, and secure their back-to-back champion’s title. The double-elimination playoffs proved to be a great addition once again as we had the chance to see the top four sides battle it out over two days before seeing lvlUP take the first place. FIFA made its return and our staff, together with the FIFA Balkan Community, organized a total of seven qualifiers that culminated in the playoffs of the tournament. In the end, esad1memic was the best player and he deservingly got the first-place award of €750. We introduced a different Clash Royale format that featured teams instead of individuals. The five invited teams were joined by the qualified team, Underdogs. After the round-robin Group Stage was played out, Crusher Esports showed a whole new level and were easily better than the rest of the playoffs’ teams.

Team uNiQUE entered the third season as one of the best regional CS:GO teams and they lived up to the expectations. The team led by Sener “SENER1” Mahmuti managed to fight their way through the upper bracket and successfully beat theOverpowered in the league’s Grand Final match, earning the biggest part of Season 3’s prizepool – €1,000. The Macedonian sides TRTRR and Vilay eSport.Black finished the season on the third and fourth places respectively, while Đorđe “DJOXiC” Niciforović’s to jeste ended up 5th-6th.

Franjo “reqvam” Blažević managed to come back from the lower bracket and upset LemiBiB in the Hearthstone Grand Finals securing himself the Grand prize of €500. Nikola had a great run in the Clash Royale bracket, and his victories against ConeKorleone and Tocilovac helped him win the Champions title.

We introduced DOTA2 as our new title for the third season of A1 Adria League. Valve’s MOBA game has a huge playerbase in the Adriatic region, and the teams showed that they are ready to take the next step in their competitive careers. Tim123 finished first after being sent to the lower bracket by The Last Jedis. Uroš “Swiftending” Galić and Tim123 were better than Level Up in the lower bracket final and they got their revenge against The Last Jedis in the Grand Final of the tournament, becoming the first A1 Adria League DOTA2 Champions. 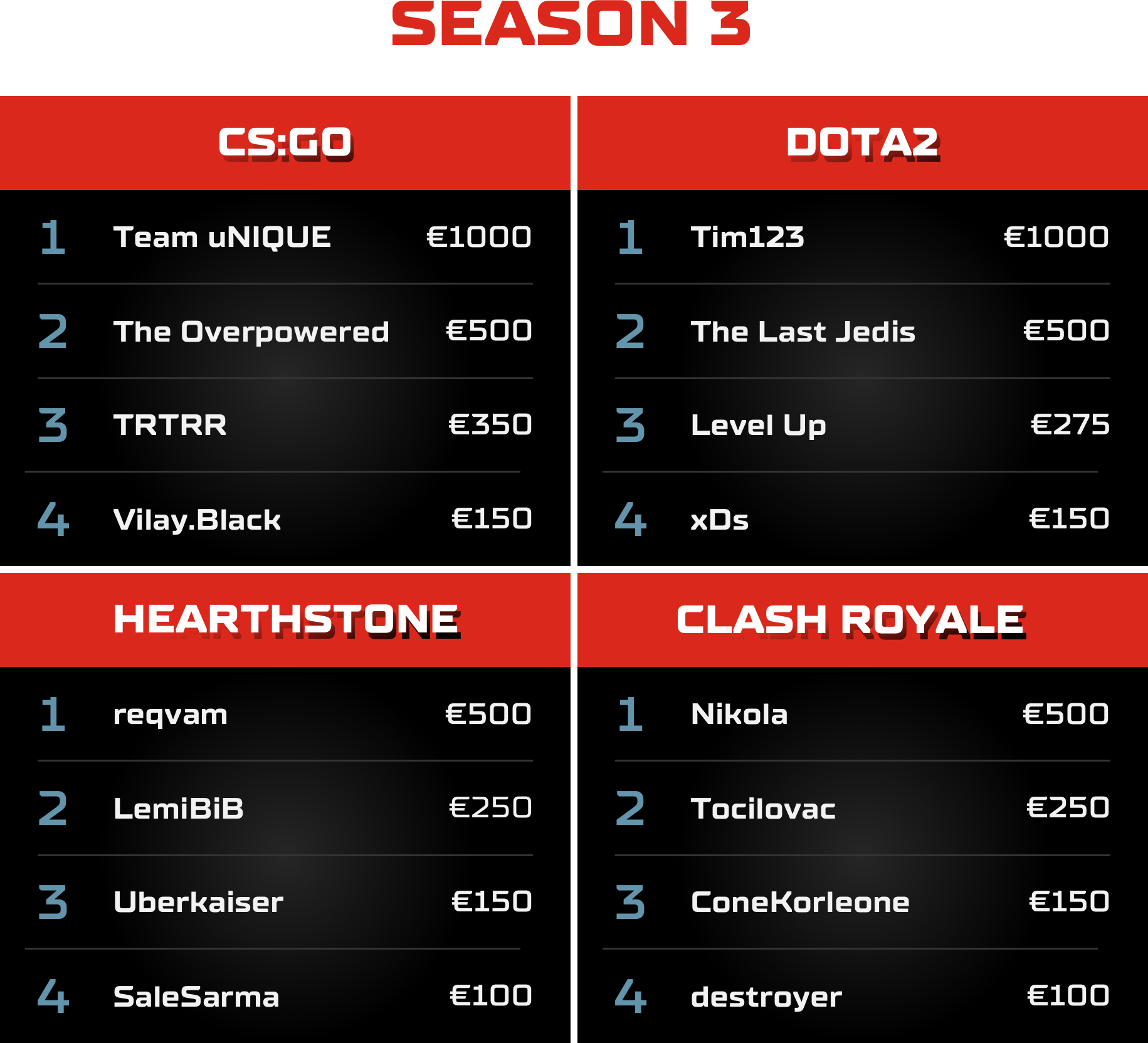 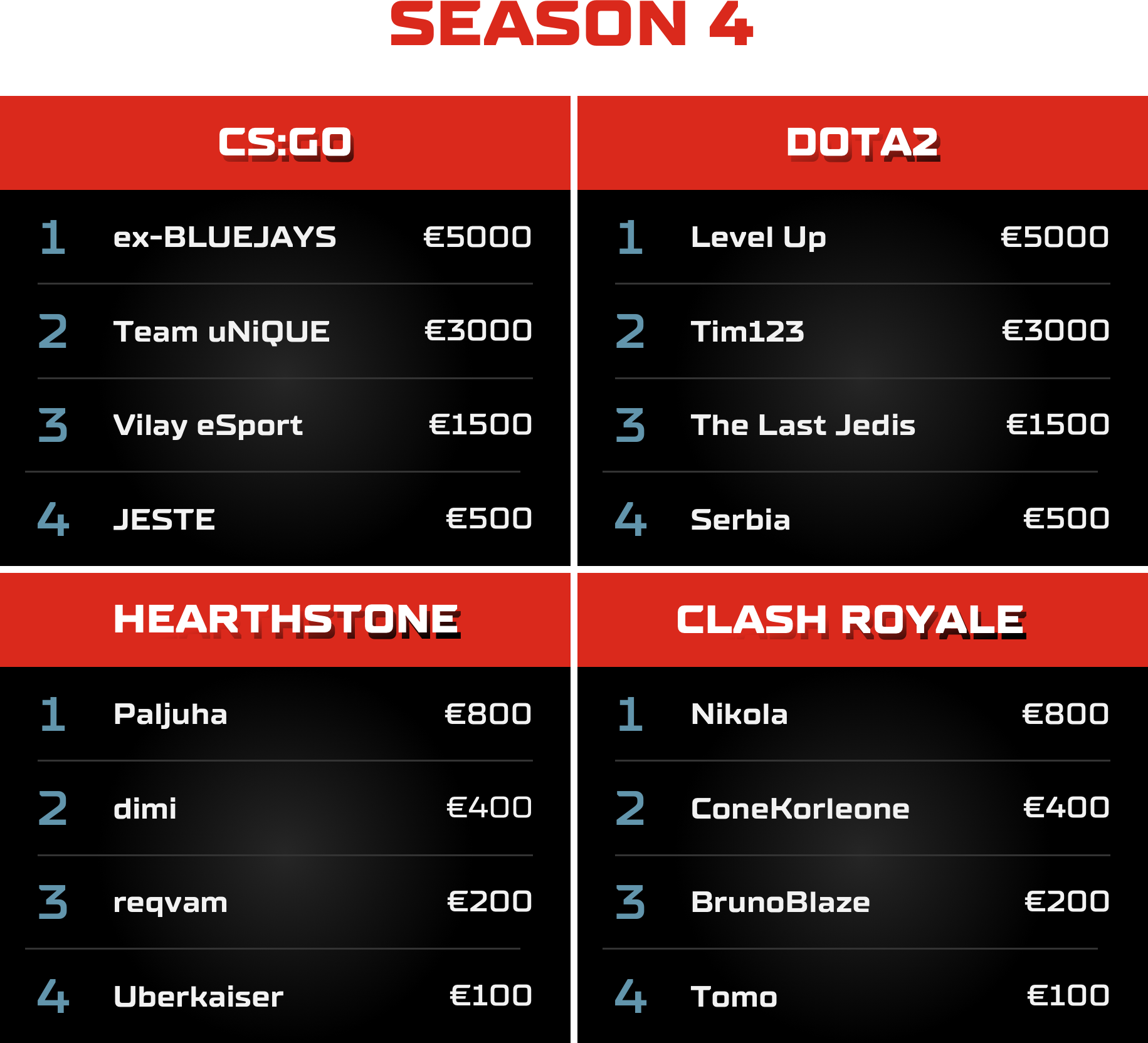 The playoffs were back on LAN in the fourth season of A1 Adria League. The Group Stage boasted phenomenal Counter-Strike, and the very best teams managed to qualify for the LAN Finals. ex-BLUEJAYS and the reigning champions, team uNiQUE, came to the finals as the clear favorites, and they met each other in the Grand Final. After a great BO3 filled with lots of highlights and quality moments, the Serbian side led by Miloš “dEE” Marčeta lifted the trophy in Zagreb.

When talking about Clash Royale, we saw some familiar faces in this season’s competition. ConeKorleone and Nikola were in the playoffs again, and Nikola was crowned back-to-back champion of A1 Adria League. Paljuha eliminated the reigning Hearthstone champion, reqvam, in the semifinals, and then proceeded to outplay dimi in the Grand Final.

Level Up were the best team in this season’s DOTA2 competition. Even though Buktop’s squad was sent to the lower bracket by The Last Jedis, they fought their way back to the Grand Final and managed to beat Tim123. Level Up were crowned champions of this DOTA2 season, earning themselves the €5,000 prize.

As time goes by everyone of us is getting smarter, stronger and a bit more experienced. So did we. In the second season we introduced some big changes in the format. Qualifiers took place well before the LAN finals, so that one game can be played at the time and qualifeirs for different games don’t overlap. But the two of the biggest changes we introduced was renaming from Vip Adria League to A1 Adria League, to proudly carry the name of the company that made it all possible, and we included two new games in the League: – Hearthstone and Clash Royale, meaning the A1 Adria League went mobile.

New powerhouse emerged on the League of Legends scene – ASUS ROG ELITE. Guys showed they are capable of great things after great results in the regional tournaments and the A1 Adria League was no exception. x25esports put up a great fight in the grand finals, but ASUS ROG ELITE was truly the better team. 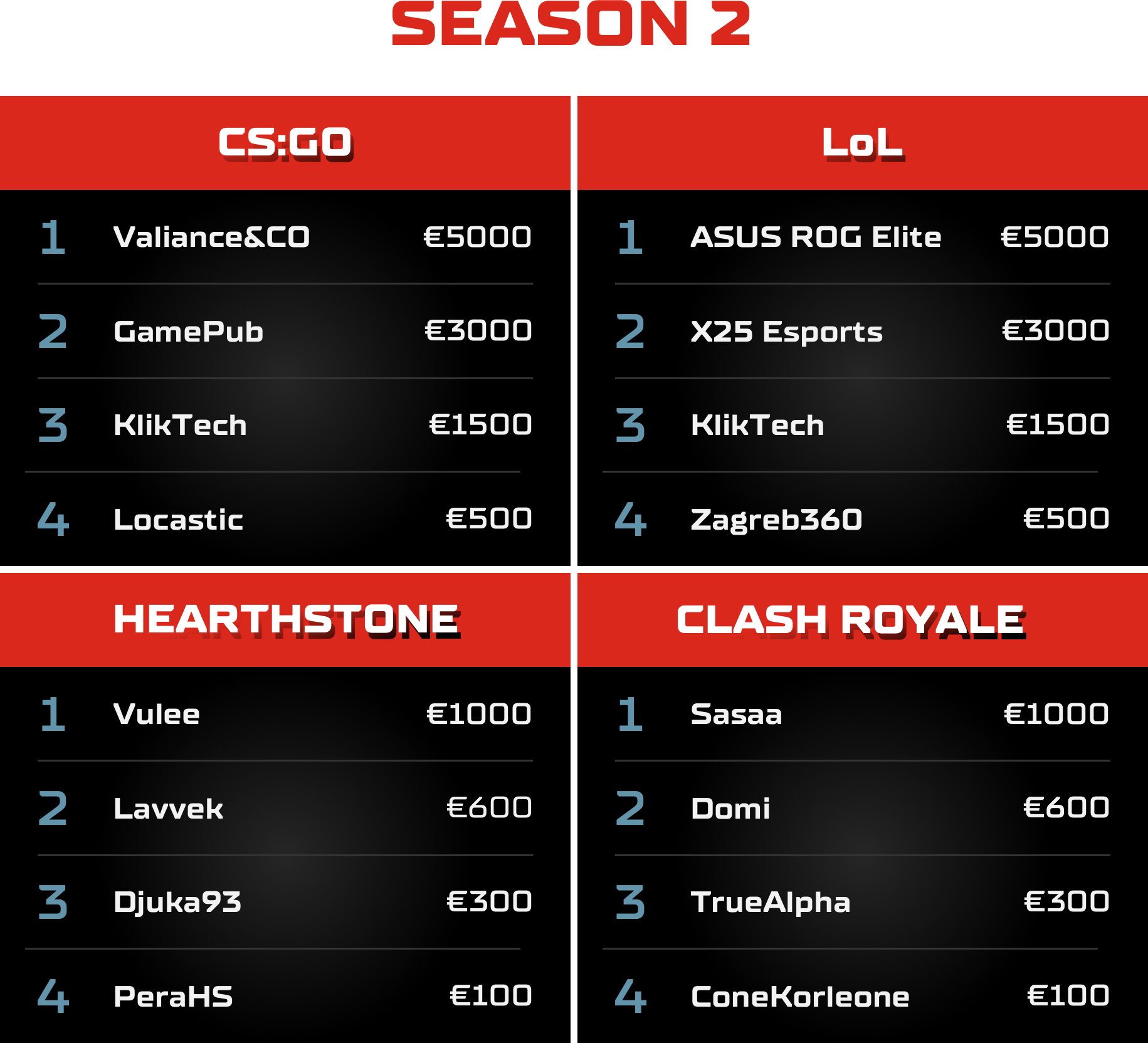 Valiance&CO came in the second season with the target on their backs, everyone wanted to take down the reigning champions. Locastic Esports proved to be the best challenger in the online part of the League, but when it came to the LAN finals, Valiance&CO had no problem taking down all the challengers that wanted their title. They won vs Locastic Esports, and then went on to outplay the GamePub in all-Serbian finals. Recently they changed their brand to Cr4zy, and for some time now they are proud representatives of our region in the top 20 best teams of the world.

In Hearthstone Luka “Vulee” Vuletić made it all the way to the first place in the nailbitting lan finals. All players showed great skill and preparation, but in Hearthstone you also need a bit of luck. The toughest opponent for our champion was another Luka, Luka Črneli playing under the nickname of Lavvek. His expressions during those finals showed everything we care about in the A1 Adria League, focus, emotions, passion and great sportsmanship.

Clash Royale finals took place on the same day. That friday we crowned the youngest champion of the A1 Adria League – Saša “Sasaa” Miskovic. Everyone gave their best but it was Sasaa who came on top in the end. Now it’s time for the new journey, new changes, and challenges.

Everything started with the official announcement of the League in the spring of 2017. Such a long time ago, don’t you feel old now? After the qualifiers in July we got the four best CS:GO and League of Legends teams to compete in the LAN finals happening at the Reboot InfoGamer, the biggest gaming convention at this part of the Europe.

Absolute winner was the team KlikTech, having representatives in the LAN finals of all three games, and taking the two first places. KlikTech LoL team will always be remember as one of the best to ever play the game in our region. They smashed everyone on their path. Toni “Sacre” Sabalić, KT toplaner and MVP of the first season made it all the way to the League of Legends European Championship since then and is now playing for SK Gaming, amazing achievement in just couple of years. KT Edinho won the first ever FIFA 18 tournament organizied by A1 Adria League. While in the CS:GO part of the League, newly formed Valiance&CO started their own path to the esports glory!