The fourth A1 Adria League week saw the completion of the CS:GO team list for the upcoming season and the first FIFA player secured his spot in the playoffs.

Over 40 teams took part in the fourth A1 Adria League Brawl Stars qualifier. It seems that the only way to eliminate one of the Good Game teams before the Grand Final is for the bracket to match them together before. On-Fire and FA Deadly lost their respective games against Good Game Red and Gold. Troleri is a newer name that managed to enter the quarterfinals of the qualifiers. There, they lost to Blue Whales but they still managed to put themselves onto the regional Brawl Stars map. Code Lyoko’s win against Come Back rounded up the quarterfinals and we advanced to the semis.

Once again, the derby between the Gold and Red Good Game squads went in favor of ToDe05 and Good Game Red. Blue Whales managed to beat Code Lyoko and they proceeded to the Grand Finals of the qualifier. The Croatian-Bosnian trio couldn’t hold their ground versus Good Game Red, and they let the Serbian side grab another 100 points in the road to the A1 Adria League playoffs. 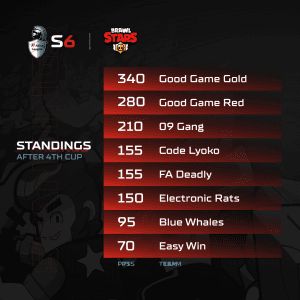 The second group stage round started with a duel between Recast Gaming and Totem Esports. Even though Totem Esports won the 2v2 set, Recast Gaming managed to come back and win the following two sets. Crushers went into the match versus KFC in a dominant manner. Winning the 2v2 set brought them a step closer to a victory, but Team KFC weren’t ready to give up yet. The qualified team came back during the KotH games and closed out the game in the 1v1 set.

As the last match for the day, Tribe Academy faced Flayn Esports. Neither team won two consecutive matches before the final set. Both Flayn and Tribe were going back and forth during the 2v2 and KotH sets, but in the end, Tocilovac and Flayn Esports came out as the better team and closed out the second Clash Royale round.

There weren’t FIFA qualifiers during the weekend. Instead, we hosted the first playoffs tournament for the best eight players from the previous trio of qualifiers. The playoffs cup started with the SWISS stage. amke2001 passed the SWISS stage with a perfect record, while mickey_rrrox couldn’t get a single win before being eliminated.

brstimir kept his great form and secured the first A1 Adria League Finals spot. The Serbian player has had a great form during the previous weeks and he definitely deserved one of the four spots in the LAN finals.

We completed the list of teams that will be competing in the sixth A1 Adria League season yesterday. The closed qualifier saw the eight best teams from the last weekend battle it out for a chance to be a part of the €11.000 worth League. eSportsKosova and Good Game secured two of the three spots after their semifinal matches against GamerS1337 and MiKS, respectively.

The third-place decider match played between MiKS and GamerS1337 saw the Kosovar team outplay Filip “DEPRESHNN” Jarkić and GamerS1337 and enter the League as the last qualified team. All the matches in the SWISS stage of the A1 Adria League will be played as BO3 matches, with the winners advancing to a single-elimination BO3 playoff event.