Two FIFA and Brawl Stars and three CS:GO matches remain until the end of the second SWISS round. The teams are slowly gaining the lead in the group stage and are fighting for their spot in the playoffs.

As always, the opening game for our A1 Adria League week is Brawl Stars. First up is the duel between Lil Surprise and Mayoi – a match that will decide who joins Noble Elite BLK in the 2-0 pool. Mayoi managed to get here with a win against Omerta, while Lil Surprise beat a weakened 09 Gang in the first round.

When the first duel concludes, Noble Elite Red and QSKE will enter the arena to fight for their first win. As QSKE Gaming forfeited their last match, this will be the first time we are seeing them in this season of the A1 Adria League. Noble Elite Red are still recovering from their defeat versus Tora Gold which sent them to the 0-1 pool. After this match, one of the teams will join 09 Gang in the 0-2 pool, while the other one will hold their spot in the middle of the standings. 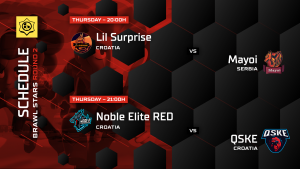 Friday, FIFA day! The only Slovenian player in this season, Leon “Sardinho213” Sardi will face Armin “Arminho0307” Hasanbegović in the first match. Arminho barely lost his match in the previous round and will be looking to fix his mistake versus Sardinho. Sardinho, on the other hand, was demolished by amke2001 6-1 which really isn’t a great start of the season. Though we are still early on and there are plenty of chances for the Slovenian FIFA player to redeem himself, his first being on Friday versus Arminho.

Marko “Klaic” Klaić and Emir “Sulja” Suljović – a clash between the new players. Each of them won one of the qualifying cups despite facing great competition from the whole region, but their start wasn’t the best and they are now looking to get their first victory. Sulja fell to brstimir and klaic wasn’t able to defeat FIFAFICO. After Friday ends, one of them will be playing in the 0-2 pool, while the second one will join FIFAFICO, esad1memic and the Sardinho/Arminho winner with 1-1. 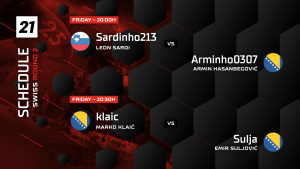 ONYX weren’t able to compete on Sunday so the match was rescheduled for the next playday. That means that we will be watching three great CS:GO matches on Sunday, with ONYX opening up the fourth playday at 14 o’clock. Their opponents will be PORTUGAL.

When that match concludes, Midnight will take on Onliners in our second BO3 of the day. Both teams are new to the League and haven’t met each other yet, which means that the match will be even more interesting than usual. To end the day, 4glory will face Good Game – a match between two of the favorites for this season of A1 Adria League. 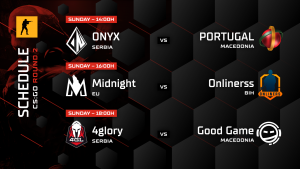