We are back on track with the League after a one-week long delay. FIFA had its first FIFA21 qualifier played out, while Brawl Stars closed out qualifier number 11.

The eight best teams in the qualifier reached the quarterfinal stage without any difficulties. 09 Gang matched up with Noobs, while FA Deadly faced BadBoys. Noobs managed to win the game against 09 Gang and FA Deadly showed great individual skill versus BadBoys. Ekipa 69 and Code Lyoko had quarterfinal matches against Good Game Gold and Red, respectively. As expected, the GG teams managed to pass this obstacle and reach the semis.

The Good Game derby happened once again in the semifinals of this cup. After a couple of wins by the Red squad, this time, it was Good Game Gold that won the match and advanced to the finals. FA Deadly followed suit and joined the finals, but Sabasniper’s squad couldn’t stand up to Good Game Gold.

The Brawl Stars rankings after the 11th cup are as follows: 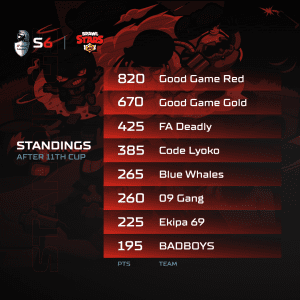 FIFA was back with the third trio of qualifiers. As FIFA21 came out, the remaining qualifiers will be played on the new version of the game. The seventh qualifier was dominated by Bosnian players with five out of the eight quarterfinalists being Bosnian. Ajdin977 was better than Erminjamak while esad1memic bested Bati.

Arminho and DziDziAnlaki secured the last semifinal spots after victories versus Stojanov_99 and Tana, respectively. In the Bosnian semifinals, esad1memic outplayed his countryman, Ajdin977, and advanced to the finals. DziDziAnlaki lost his match versus Arminho but managed to beat Ajdin in the third-place decider. Arminho was crowned the champion of this week’s FIFA qualifier as he came out on top against the current champion, esad1memic. 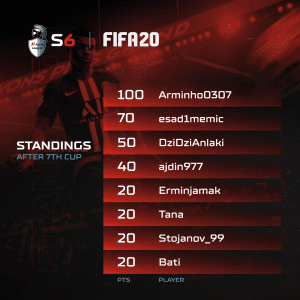