For the second time in as many playdays, Salada de Frutas destroyed everyone and claimed first place in our Brawl Stars qualifier of the week.

Half of our qualifiers are now finished. Today, the Brawl Stars players that have been eagerly awaiting the beginning of our new qualifiers jumped into the arenas to earn more points. We are slowly forming our leaderboard, with teams such as Salada de Frutas, Mayoi, and Winx Club slowly confirming their spot in the league. Lightning Strike also had a good day in this qualifier, but their victory celebrations after the match against Immortal Balkans were quickly shut down by Salada de Frutas. Last qualifier’s winners paved their way to yet another grand final appearance after winning their matches versus Night Alpha, Twisted Mind, the aforementioned Lightning Strike squad, and finally Mayoi.

On the other side of the bracket, QuickMind did even better than in the first qualifier. They went all the way to the semifinals, but Winx Club were there to stop them in their tracks. The two semifinal matches ended in favor of Salada de Frutas and Winx Club. The former defeated Mayoi with a dominant 3-0 final scoreline, and the same thing happened in the second semifinal match of the day. Finally, the grand final was played out. Salada de Frutas faced Winx Club, and they managed to hold their ground once again. One more 3-0 win put another 100 points in the bag for the squad, and they are now leading the Brawl Stars battle.

Check out the current Brawl Stars rankings below and make sure to SIGN UP for our upcoming Brawl Stars qualifiers: 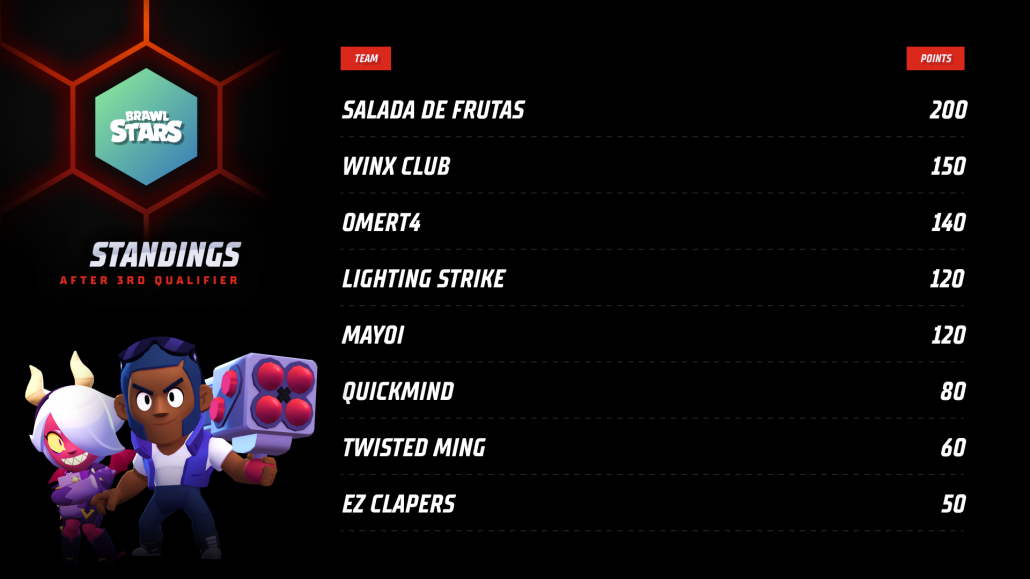