We are more than halfway through with the Brawl Stars qualifiers. FIFA closed out its second playoffs cup, and just like always, both games showed us the quality of the competitive scene in this region.

Over 20 teams signed up for the seventh Brawl Stars qualifier. As we are reaching the end of the qualifiers, the leaderboard is starting to form itself and some of the best names in the region are already up there. One of the things that surprised us the most in this qualifier was that finally, someone other than GG Red was able to take down Good Game’s Gold squad. The team that managed to pull this off were Blue Whales, and they did it in the quarterfinals.

Two newer names, Gamer squad and Ready To Win also reached the quarters with the latter advancing to the semifinals of the qualifier. Code Lyoko bested Ekipa 69 on the road to a match against GG Red, who had just won their match versus Taktika baklava. Blue Whales continued with their awesome form in the semifinal match against Ready To Win as well. Good Game Red breezed past Code Lyoko, and in the Grand Finals managed to avenge Good Game Gold against Blue Whales. 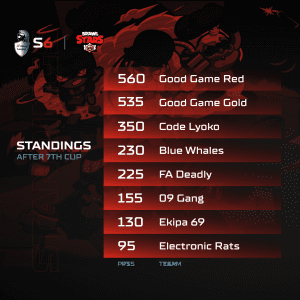 Eight players once again faced off for a spot in the main playoffs stage of the League. The four players that managed to go past the SWISS stage were Robert “rob1” Persaj, Djordje “JasikFifa” Cumbo, Tarik “amke2001” Novo, and the reigning champion, Esad “esad1memic” Memić. Stevan Mačkić and PvtMole cast the most interesting playoffs matches and we had the chance to watch a couple of incredible FIFA games throughout the weekend.

The four players that advanced through the SWISS stage met each other in a single-elimination cup. amke2001 faced rob1, while esad1memic played against Jasik. esad1memic and rob1 were eliminated from the tournament after losses to Jasik and esad1memic, respectively. An amazing grand final saw amke2001 become the second grand finalist of the sixth A1 Adria League season. FIFA will be back with the last trio of qualifiers this Saturday, and in the meantime, esad1memic and brstimir can prepare for their opponents.