Krško opened the second round with a match against eSportsKosova. After a good showing versus Good Game, Tilen “Grmek” Grmek and Krško were destroyed by one of the Kosovar teams in the League. The first half of Dust2 ended 13-2 in favor of Blend “v1w” Bunjaku’s team and the Slovenian-Croatian squad couldn’t win a single round in the second half. Krunoslav “Salted” Katalinić’s Krško weren’t any better on the second map, Inferno, and the team quickly secured a spot in the 0-2 pool. eSportsKosova will now be joining the 1-1 part of the League, together with Good Game.

Jane “aidKiT” Apostoloski’s Macedonian quintet lost the duel versus Blink. The match went to all three maps and after an initial win from Good Game, Blink turned the game around and secured yet another victory. Blink’s pick, Mirage, was a tight map that ended in a victory for Good Game. Both of the teams had really good plays, but in the end, three great plays from GG’s individuals won them the first map. Even though the first map promised a great BO3 series, Blink stomped their opponents in the next two maps. Ernest “xhoci” Xhoci was on fire and together with Genc “gxx-” Kolgeci they dominated the competition.

The second part of the second SWISS round will see two excellent matchups. GODZ1337 meets MiKS (EAGLES) in the first match of the day, and lvlUP will face Shock Bomb immediately after. Tune in and watch the biggest regional esports League on our Twitch channel! 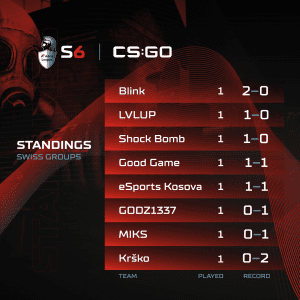