The CS:GO group stage has finally begun. Eight teams will be facing each other in a SWISS league that will determine the four playoffs participants. Last Sunday we had the chance to see the first two matches of the new season.

In the first match of the League, we saw a Kosovar duel between Blink and eSportsKosova. Sener “SENER1” Mahmuti’s team were considered favorites for this matchup, and they didn’t disappoint. Blink took 8 rounds on Train before eSportsKosova managed to strike back. The half ended with a 13-2 lead for the season 5 runner-ups, and they even won the pistol round after an amazing clutch from Genc “gxx-” Kolgeci. In the end, Blink closed out their map pick with a 16-6 victory.

The BO3 headed into Dust2. eSportsKosova showed some resistance at the beginning, but as the match progressed, their opponents overcame Arlind “deb0” Sadiku’s side. Most of the viewers expected a 2-0 win for Blink, and that is exactly what happened. The best Kosovar team kept their great form during the second half and won Dust2 without any difficulties (16-4).

The second match of the day saw the Macedonians from Good Game face Jan “jkXy” Konečnik’s Krsko. We witnessed a very close first half of Nuke. Good Game’s CT side ended with an 8-7 lead, but in the second part of the map, we saw an excellent T side from Damjan “kyxsan” Stoilkovski and the rest of the squad. The Macedonian lost only one round in the second half and Kristijan “KiKOtB” Stojmanovski calmly won the last round with a 1v2 clutch.

Krsko took the lead in their hands during Dust2. After an initial Good Game lead, the Croatian-Slovenian squad came back and closed out the half with an 8-7 lead. As the map was nearing its end, the teams were playing much better and they couldn’t get a string of two rounds in a row. However, Jane”aidKiT” Apostoloski and Good Game didn’t let the map reach overtime and ended the day with a close 16-13 victory.

The second part of this round is continuing today. We will see a clash between the current champions lvlUP and MiKS, while later on, Shock Bomb and GODZ1337 will try to get their first win of this season. 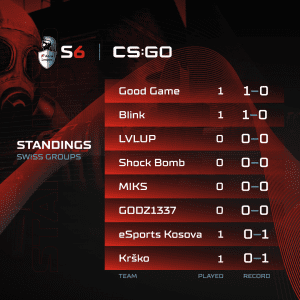