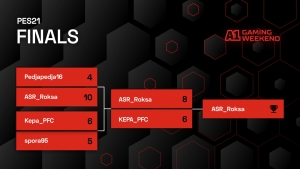 We saw a massive turnout from the PES players in our region. Over 190 players were split into 32 groups going in into the tournament. After the group stage was finished, only 64 players remained in the BO3 playoffs. Kule and the PESExpert community did a great job of organizing the whole thing and running it without any problems.

Fast forward to the Round of 16, the top players of the tournament faced each other for a spot in the quarterfinals. pongpong_hr and DENDZAMIN outplayed Kaplijev_NS and Vojkec17, respectively, while StefanKure90 was better than Zeusinjo. Koso-93 slipped past PlantifulBat7 and the actual champion of the tournament, Kepa_PFC was better than Flegma_ST. Heading into the quarterfinals, Kepa continued his winning streak with a 2-0 sweep versus Aminzagreb32. MeGustaSrbija secured a spot in the semis, while Aca94dg ended the tournament after losing to the aforementioned player. The last two semifinal spots were filled by StefanKure90 and DENDZAMIN who managed to breeze past Koso-93 and pongpong_hr, respectively.

PvtMole led us through the semifinals in which Kepa_PFC dominated MeGustaSrbija. The second semi was a duel between StefanKure90 and DENDZAMIN which saw the former secure the second spot in the Grand Finals without any difficulties. MeGustaSrbija managed to best DENDZAMIN in the third-place decider and claim his share of the prize pool. In the Grand Finals, we had the chance to see Kepa_PFC beat StefanKure90 after pulling off quite the comeback. 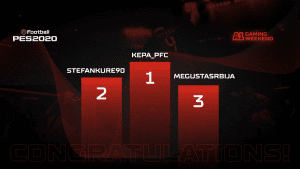 This marks the end of the A1 Gaming Weekend tournaments which were a great way to spend the time between the seasons. The sixth A1 Adria League season begins soon, so make sure to sign up and be the best!

While waiting for the third A1 Gaming Weekend cup to start, we decided to get in touch with the team that will help us organize the tournament and introduce their community to all of you following us. Just as the FBC, the PESExpert guys are constantly helping the players in our region with organizing a big number of tournaments and helping them in the development of their careers. I contacted Kule from PESExpert who was happy to answer my questions and make his community known to even more people.

Hello, Kule, thanks for taking the time to do this interview. Could you introduce the PES Expert community to the broader public? How long have you been developing the PES scene in our region?

The PESExpert community exists for over 10 years now, since 2010 – Playstation 3. It was at that time that the founders saw that Croatia has a lot of players that play the best soccer simulation, PES. Since that moment, a lot has changed, we switched to PS4, there were good and bad editions of PES, but the number of members and followers kept increasing constantly. In 2019, PESExpert split into two groups, with the first (12.igrač) focusing on Full Manual, Master League, and the casual side of the player base. Our community (PESExpert) consists of 15 leagues and over 300 players, some of which are between one of the best in Europe, and we can say that we are more focused on developing the quality of the overall scene. Players from all nationalities are welcomed here and we can proudly say that we are successfully working with members from Serbia, BiH, Montenegro, Slovenia, and Macedonia.

What are some tournaments that you organized in the past? Tell us about the PES Expert 1v1 & 2v2 tournament that boasts a 10.000€ prize pool.

From the bigger tournaments, we have organized the “Lumici Centar” tournament in Varaždin, with 80 players playing 1v1, we organized the Reboot 1v1 & 2v2 tournament with 70 players and we worked with Caffe Boeing, where we managed to organize two cups with a total of 90 players.

Our biggest project to date is happening on the 12th of September in Velika Gorica, the sports center Panadić to be exact. The tournament will have 256 players for the 1v1 part, and 64 2v2 duos. Players are showing massive interest in the tournament, mainly because of its €10.000 prize pool, which is the minimal prize pool and is likely to go up. Except for the main tournament, there will be a theme park for kids and adults and a 3v3 bubble football.

How developed is the PES community in the Adriatic region? Do you see this A1 Gaming Weekend tournament as a chance to even further help the players in their competitive careers? Are you looking forward to a great turn out from the players?

The PES community in our region is really big, with over 20.000 active players, we have Serbia that has the biggest number of players and they are really investing into esports with prizes and also bringing the scene closer to the mainstream media with a lot of leagues. We see this tournament [A1 Gaming Weekend] as a chance to show the people just how many players there are in the region that play PES and that it is really worth it. We also hope that people will recognize our organizational abilities and this project will help the PESExpert staff with further projects.

Do you prefer the LAN competition to the online format we have now because of the worldwide pandemic? Are you looking back to going back to LAN?

Online and offline competitions have a lot of differences, for example, when playing tournaments online, not everyone has a connection of the same quality, and that with the delays from the different TV-s can often be a disadvantage for one of the players. Those problems are nullified in offline competitions and the only things that matter are the mechanical and mental quality and capability of the player and that is why playing on LAN is much more popular in showing the real skill of the player.

The A1 Gaming Weekend really helped us pass the time between the regular seasons of A1 Adria League while also helping the scenes of the featured titles grow. After Rainbow Six Siege and Rocket League, it is time to reveal the details surrounding our third game, Pro Evolution Soccer.

The eternal rival to the FIFA franchise, PES is making its debut as a game covered by the A1 Adria League, or in this case, A1 Gaming Weekend. We are really happy to give a chance to the regional PES players, and together with the PESExpert community, we are expecting a great turn out from the players. An interview with one of the members of PESExpert is coming soon, so stay tuned if you want to learn more about this amazing community of players.

Playstation 4 is going to be the featured platform and the best players will split the €500 prize pool accordingly. All the competitors will be split into up to groups, depending on the turnout, with 256 being the maximum number of players allowed to sign up. The group stage will begin at 15 o’clock on the 1st of August, with the best two players of each group advancing to the playoffs. The playoffs will be played on the next day, Sunday and they will be played in a BO3 format, with overtimes and penalties enabled. The matches are set to last 10 minutes each and on Sunday, all the Top 8 matches will be streamed on the A1 Adria League streaming channels.

Make sure to fill up the Google Docs sign up form here and follow the rules and decisions made in the Discord server that you will be invited to upon signing-up. The €500 prize pool for this Pro Evolution Soccer tournament will be split as follows: