Four qualifiers, eight teams, five rounds of SWISS. The last month has been filled by the best Counter-Strike our region can offer. After the regular season finished, we have four remaining sides still in the fight. The first day of the CS:GO playoffs finished with the favourites, QSKE and lvlUP (ex-Juggernauts), each earning a spot in the Upper Bracket Finals.

The day started with a derby between QSKE Gaming and GamerS1337. The players from both teams are very familiar with each other, and both the maps were intense and interesting to watch. The first map, Nuke, was pretty close at the beginning but then QSKE managed to get a good round streak and finish the half with a 10-5 lead. They even extended their lead to 15-9 at one point, but the GamerS weren’t ready to give up. Blaže “HEv1X” Hristov and his squad won four rounds in a row and brought the map to 15-13, but QSKE closed it out and went to Inferno with a 1-0 lead.

After a 8-3 lead on Inferno for QSKE, GamerS1337 turned the game around and had a 11-8 lead at one point. The QSKE players didn’t let that destroy them mentally and kept their cool, eventually winning the match and the series (Inferno 16-12). With this win, they are a step closer to the Grand Finals, while GamerS1337 will be facing Blink in the Lower Bracket elimination game tomorrow.

We saw a rematch of the last season’s finals between lvlUp and Blink in our second match. We didn’t see a third map this time as the Serbian powerhouse closed out the match after only two maps, Nuke and Train. After having a strong 9-2 start on the T side of Nuke, Blink started getting into the game and quickly brougth the match to a 11-11 scoreline. At the very end of the match, lvlUP won five rounds in a row and came a step closer to their match against QSKE.

Train, as one of Blink’s best maps was much closer in terms of the scoreline, and we saw our first playoffs overtime. After two 9-6 halfs, the match went into overtime where lvlUP edged out Blink and booked a spot in the Upper Bracket Finals versus QSKE (Train – 19-17). 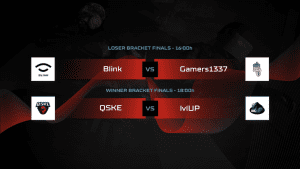 Tune in during the weekend and support your favorite team in their road to the Champions title.