As the fifth A1 Adria League season is nearing the end, it is time to announce and start the playoffs of our fourth game and most popular title, CS:GO.

In the fifth round of the SWISS League, GamerS1337 and Gameroids played against each other, with the Macedonian-majority team entering the playoffs as the third qualified team. Blink easily outplayed Athaim and secured the last spots in the playoffs. With the last two regular-season matches being played out, here are the leaderboard standings: 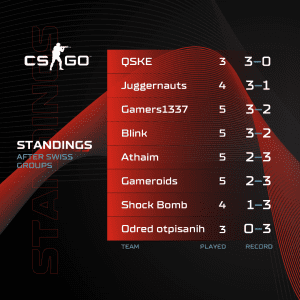 The playoffs will be played in a double-elimination format with all the matches being BO3 series. The battle for the grand prize of €1500 is starting today and it will end on the 5th of July when the Grand Finals will be played out.

These are the first round matches:

Even with some shaky games, all the favorites managed to qualify for the playoffs. I am sure that all the games will be intense and close, so make sure to watch them all and support your favorite teams and players.