HERE WE GO! Our CS:GO teams list is finally completed with our two invited additions – bronze defenders 4glory and the reigning and three-time champions of A1AL – ONYX. The three-time A1 Adria League champions ended the last year with some drastic roster changes. After the last season, Petar “HOLMES” Dimitrijević and David “Dav” Mijanić joined the team in place of Miloš “dEE” Marčeta and Dimitrije “DiMKE” Veljković, but the latter recently announced his reunion with his former teammates. This time around they won’t have to lock horns with their arch rivals Blink, but both 4Glory and Good Game are ready as ever and they will pose a certain threat for the glorious ex-LVLUP roster.

On the other hand, 4glory recently announced the addition of Sergej “IDZUO” Sovilj and dEE to their roster. These two players came in to replace Dejan “Katalic” Koprivica and Nikola “Dragon” Bošković and have already become a valuable asset for the Serbian organization in the season. dEE was part of the roster that won the last three seasons of the League, and on the other side, we have IDZUO, a talented player that will strengthen the overall firepower of the team. 4glory finished the sixth season in third place, and their form shows that they will be able to at least repeat that success in the seventh season.

ONYX and 4Glory will join six more squads that secured their spot via open qualifiers. With that in mind, these teams will participate in the seventh season of A1 Adria League: 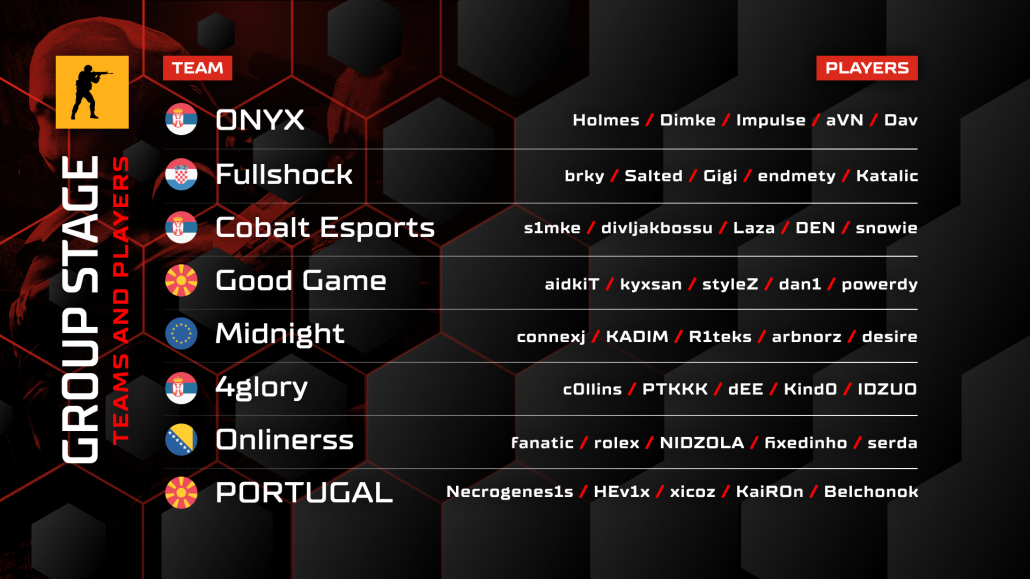 4glory is a familiar name in the region. Counter-Strike veterans probably remember the regional domination of 4glory, as well as the three World Cyber Games tournaments they played on (2006, 2007 & 2009). pTKKK and the Shock Bomb team were the ideal squad for the organization that was looking to make its comeback to the scene, so they managed to come to terms and sign a deal.

Can you tell us a bit more about the organization?

As you could see yourselves, the organization is new, and they decided that we were going to be the team they pick up. Fans of gaming, especially Counter-Strike, had the chance to watch 4gl in the 1.6 era where they dominated for years, and here, we got our chance to represent the organization in the best possible light and give our best at the moment.

Did you reach out to the organization or did they notice you?

Actually, the organization contacted us, they were looking for a team. With the help of good friends in the world of gaming, we managed to connect and we came to an agreement.

Ivan had only good things to say about the new organization. He mentioned that they provided the squad with full support since the beginning and that they have yet to see an organization that has given such good conditions to its players.

How did the negotiation period go?

They knew what they wanted and what they didn’t want. When we talked about things that were to be expected from us in the future and the things happening now, we came to a mutual agreement.

Fortunately and to the satisfaction of both sides, this is one of the rare organizations in the region and we have full support in everything that we do, they are getting to know us and vice versa and we are hoping for perfect cooperation.

One of the problems of regional Counter-Strike is the lack of organizations. Even the slightest support the players get is welcomed by open arms so we are seeing that new organizations and already-existing ones are trying to bring stability to the Adriatic region.

In this time, when the majority of the Balkan teams don’t have organizational support, the appearance of 4glory on the scene and the potential good results will even further motivate organizations in investing in our teams.

How much does the support of an organization mean to you after so many months without a home?

As you know, the general situation in our region is very weak when it comes to organizations and what they can offer, so even the slightest amount of support could be life-changing. But 4glory is on a whole different level that I haven’t seen or heard anywhere else in the regional [Counter-Strike] scene.

We instantly got all the support we could’ve gotten, right when they said they wanted to sign us. We are currently doing a bootcamp in the Relog Media center, probably the best bootcamp in the region and we got everything that we to bring our game to the next level which without the help of an organization wouldn’t be possible,

What are your plans for the future, now when you have a new home?

Our plans are the same. Our goal is to constantly improve and to play big tournaments in the future – we got invites for the Nine To Five 7 Dawn and we will play it starting on the 1st of December, and you will be able to watch us on the ARENA ESPORT TV Channel or on the Relog Media Twitch channel.