The second part of the first SWISS round was played on Sunday. lvlUP and Shock Bomb secured their first victories, while their opponents proceeded to the 0-1 team pool.

lvlUP faced MiKS in their first match of the new A1 Adria League season. As most of the viewers predicted, lvlUP won the BO3 match in a rather quick fashion. After a 12-3 lead on Nuke, lvlUP managed to close out the map quite convincingly. The reigning champions and MiKS headed to Dust2 and the result was even more one-sided. MiKS tried to contest the Serbian squad in the beginning, but the Kosovar team couldn’t hold their ground against the powerhouse.

The second match of the day saw Shock Bomb and GODZ1337 go to all three maps. It looked like GODZ1337 would closed out the first map, Dust2, in regulation, but Luka “c0llins” Živanović’s team had other plans, and the map went into overtime. Despite Shock Bomb’s efforts, the Macedonian side was finally able to win the map and proceed to Mirage.

Shock Bomb managed to bounce back in the following two maps. The team that won the recent Serbian LAN tournament, Click N Play, outplayed the Macedonians on Mirage and Inferno and secured a matchup versus lvlUP in the second round of the SWISS stage. 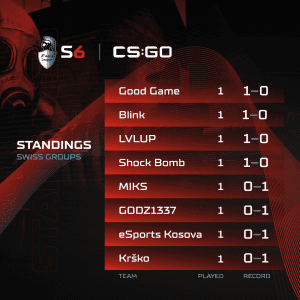