As today’s qualifier was the second-to-last one of this FIFA season, we already know some of the players that will participate and compete in the upcoming SWISS stage.

Last week’s runner-up, Esad “esad1memic” Memić faced tough players such as mrky2402 and Leon “Sardinho213” Šardi in his first two rounds. He managed to beat mrky, but couldn’t squeeze past Sardinho. Tarik “amke2001” Novo, one of our finalists, was a part of this half of the bracket as well. One of the players he faced on his road to the quarterfinals was Robert Peršaj, a player that hasn’t been active recently but played in previous seasons of the League. Amke managed to overcome Robert, breeze past Sardinho, and finally, defeat Harun “Hara” Parla in the semifinals of this cup.

Simultaneously as amke2001, Miloš “brstimir” Majdevac was fighting for his spot in the finals as well. Ranked fourth before the beginning of this qualifier, brstimir advanced to the later stages of the tournament over Petar_Puljic and Jelusic90. He met Hrvoje “HRVoje-1995” Čleković in the quarters before challenging Emir “Sulja” Suljović a round later. The Bosnian player gave it his best, but brstimir came out as the winner of this match. 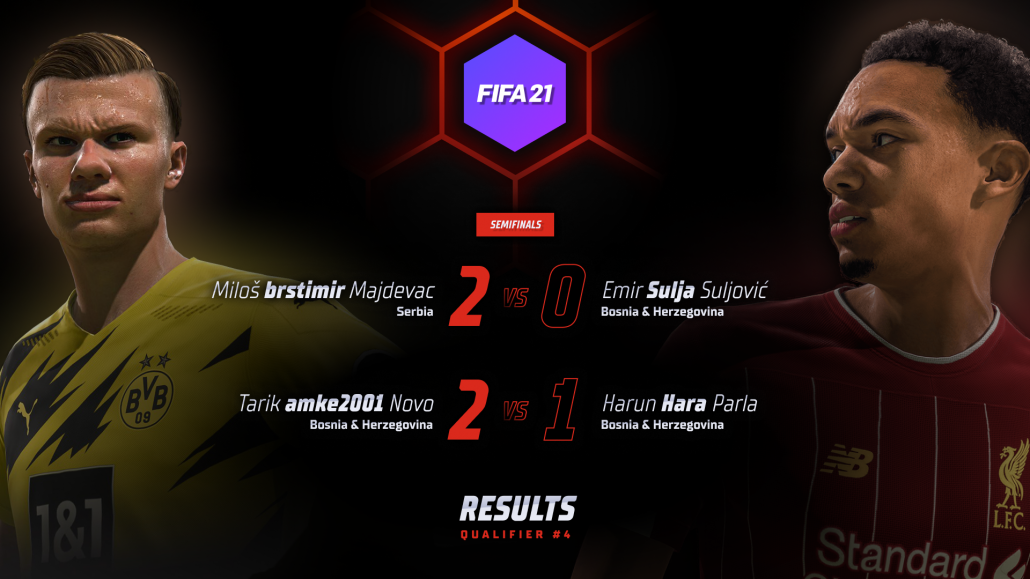 The third-place decider ended earlier today and Hara managed to achieve a 2-0 victory over Sulja. The main prize of this qualifier went to amke2001, while brstimir earned 70 points, summing it up to a total of 180. Next week, the final qualifier will be played out and we will know who the eight qualified players are. It is your last chance to secure a spot among the very best FIFA players in the region.

Make sure to visit THIS link to sign up for the upcoming qualifier.